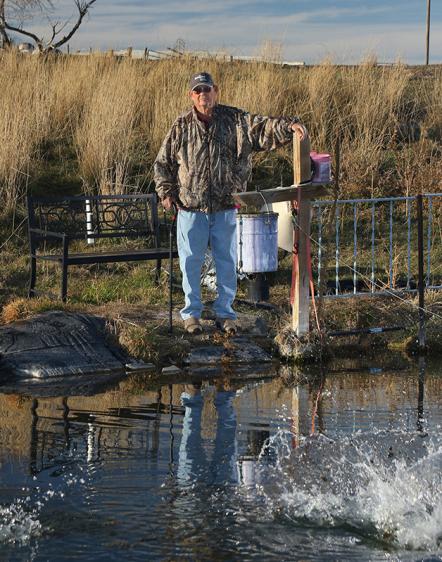 When Morrill resident Steve Dolberg was initially diagnosed with diverticulitis in March 2018, he had no idea that he was about to embark on a medical journey spanning multiple surgeries, cancer, a bout of sepsis, chemotherapy, long-term hospitalizations, a stint at Regional West’s Acute Rehabilitation Unit (ARU), and a lifetime of dialysis treatments. What got him through his ordeal?

Determination. Hard work. Setting goals higher than the ones he was given.

With Steve’s diverticulitis diagnosis, medical tests and surgery soon followed. Three feet of his colon was removed, and he was diagnosed with colon cancer. A PET scan revealed that the cancer had spread to his liver, and he underwent seven chemotherapy treatments over the next few months. In November 2018, Steve checked in to a Colorado hospital for a liver procedure, and contracted sepsis post-surgery. He was put on a ventilator, relied on feeding tubes, and was given a 10 percent chance of recovery.

After spending eight weeks in a Denver hospital, followed by two months at a long-term care facility in Colorado, Steve was transferred to Regional West’s ARU in March 2019. Upon arrival, he was wheelchair-bound and required a slide board to move from his bed to a chair. The determination and hard work part of his story kicked in.

Daily occupational and physical therapy sessions began. Steve said the therapists “pushed me hard – really hard.” Together they set weekly goals, something Steve was familiar with during his career as a crop advisor for Simplot, and he worked hard to exceed those goals.

“A lot of work gets you home,” he said. “That, plus a good attitude, went a long way in helping me reach my goals.”

After relying on a feeding tube for three months in Colorado, Steve regained his appetite in the ARU, and said the breakfasts in particular were “absolutely delicious!” After losing over 130 pounds during his ordeal, he was elated being able to enjoy food again.

Steve said having the support of loved ones during recovery is crucial. He recalled that at one point his wife, Sylvia, gifted him a small glass hummingbird that symbolized home and hope.

“My support system was out of this world,” said Steve.

Six weeks after being wheeled into the ARU, Steve was discharged from Regional West, able to walk with the help of a walker. He still requires dialysis three times a week, but there are plans to reverse the colostomy in the near future. He is happy to be home with Sylvia, able to view real hummingbirds when sitting by his own picture window.

Steve’s advice to other patients who are embarking on an ARU journey?

“Don’t be fearful – be proactive, and don’t ever give up.”