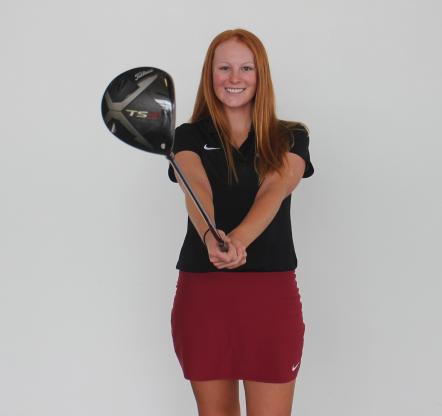 As a college sophomore and member of the Chadron State College women’s golf team, Chadron resident Alpine Hickstein is a focused, dedicated student athlete, brimming with health and vitality. In November 2019, when she first experienced numbness and tingling in her left leg, plus temporary hearing loss, she mentioned it to her parents, but wasn’t overly concerned.

The numbness and tingling returned that same night, so Alpine saw her family physician in Chadron the next day. After logging her symptoms for a month and seeing a repeated pattern of numbness and tingling, she underwent a brain and neck MRI in Chadron, which showed a non-cancerous cavernous angioma; a small growth made up of abnormal, thin-walled blood vessels. A referral appointment with Regional West Physicians Clinic neurologist Adam Gulhan, MD, revealed that Alpine had in fact been suffering seizures, and she was placed on anti-seizure medication.

Enter Regional West neurosurgeons Omar Jimenez, MD, FAANS, and Raqeeb Haque, MD, FACS, FAANS. During Alpine’s initial consultation with Dr. Haque, he recommended surgery as the best option, even though the lesion was benign, since waiting increased the possibility of further bleeding or a stroke.

After spending time conferring with Alpine and her parents, and learning that she is a college athlete who hoped to compete in the spring golf season, Dr. Jimenez made plans to employ stereotactic stealth navigation that would localize the lesion during surgery, leading to a smaller incision and a quicker recovery.

“This type of brain surgery is typically only performed in large university hospitals in an urban setting,” says Dr. Haque. “We’re so fortunate to have a skilled surgeon like Dr. Jimenez, who is trained and has experience in this technique, right here at Regional West.”

Alpine knew that her head would need to be shaved during her January 10 surgery. What she didn’t know is that Dr. Jimenez had high hopes of using a hair-sparing approach in which small strands of hair are looped with rubber bands then stapled to the scalp, paving a clear path to the incision. Because the technique requires rigorous site sanitizing and takes more time than a traditional craniotomy, Regional West is one of just a handful of hospitals nationwide performing the hair sparing technique on adults. It is a more common procedure with pediatric patients.

“The reality is that the hair-sparing technique takes more time to prep the patient and close the incision than with a traditional craniotomy, so it’s not widely used in the U.S., except in larger urban hospitals,” says Dr. Jimenez. “But a lot of adults identify with their hair, and having a shaved head and scalp incision lets everyone know that you’ve had a big operation – the hair-sparing technique is psychologically worth it long-term for many patients.”

Immediately after surgery, Dr. Jimenez removed the rubber bands and staples and Alpine awoke to the wonderful surprise that her hair was intact and the incision completely hidden. She spent just two-and-a-half days hospitalized at Regional West; one-and-a-half days of that in ICU. Her incision staples were removed one week after surgery, and she had a repeat MRI a month later, which showed no evidence of recurrence or bleeding.

“Hearing that your child needs brain surgery is so scary,” says Alpine’s mom, Misty. “It speaks wonders of both her doctors and her work ethic that she had such a rapid recovery.”

Less than two months after surgery, now off seizure medication and with medical clearance from Dr. Jimenez, Alpine traveled with her Chadron State teammates to a Division II women’s golf tournament in Las Vegas where she placed third out of over 80 women. Thanks to the hair-sparing surgery, Alpine’s surgery scar is completely covered by her long, red hair, and she says people can’t believe that she had brain surgery just a few months ago since there’s no visual evidence.

She keeps a small golf notebook that details greens and the layout of golf courses she plays. There’s a new addition to the notebook – a photo of her head during surgery that was given to her by Dr. Jimenez. It helps keep things in perspective, and if she’s having a bad game, reminds her that the small things in life “are really no big deal.”

“Being able to keep my hair made the whole physical and mental recovery so much easier,” says Alpine. “Considering the situation, I couldn’t have asked for a better experience. Regional West provided me with the best care possible that I ever could have imagined, from the minute I first stepped through the doors – everyone was so positive and encouraging.”

“We’re so grateful to Dr. Jimenez and Dr. Haque,” says Misty. “We trusted them with our daughter’s health – I just knew in my gut that they were the right physicians for her and that Regional West was the right place for us.”