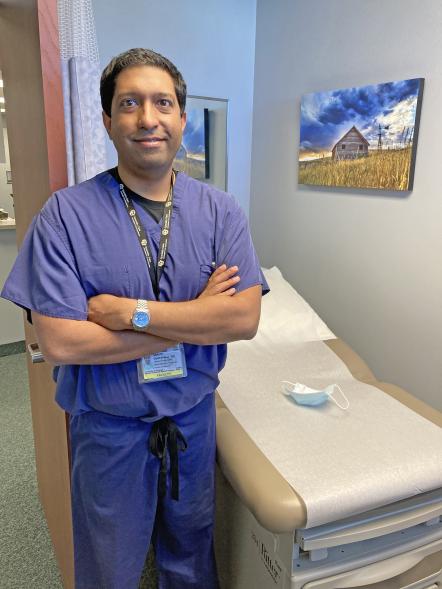 Helping his patients live full, active lives is what gynecologic oncologist Saketh Guntupalli, MD, FACOG, FACS, is striving to do every day.

“We’ve made progress in cancer care.” Dr. Guntupalli said. “We’ve increased survival, but we’d like to increase cure rates even more so women can live their lives to the fullest, however they want to live it.”

Based out of University of Colorado Health in Aurora, Colorado, Dr. Guntupalli currently travels to Regional West Physicians Clinic-Women’s Center in Scottsbluff once a month to see patients and perform surgical procedures.

The plan to travel to Scottsbluff was hatched in an effort to bring care closer to patients in the panhandle, so they don’t have to drive to Denver for treatment. Dr. Guntupalli said it made more sense – especially in winter weather – for one person to travel to see multiple patients rather than multiple patients traveling to see one physician.

“The patients like being able to have surgery in Scottsbluff and be able to go home the next day,” Dr. Guntupalli said. “I think we’ve built strong relationships with the OB-GYNs and the oncologists there, so we can provide a resource for them.”

Utilizing a “hub-and-spoke” model, Dr. Guntupalli’s group has other Colorado outlets in Grand Junction and Fort Collins, in addition to the practice in Scottsbluff.

“Healthcare is increasingly becoming more of this hub-and-spoke model,” Dr. Guntupalli said. “We have to offer more care at the local level. The idea of everybody driving to a big city is a little antiquated. I think we have to develop a more robust model that really does bring in more of the care locally.”

Advancements in his field make this a challenging, but rewarding time for Dr. Guntupalli.

“It’s an exciting time in cancer care because we are at this juncture where we’re learning a lot more about how cancer operates on a cellular level,” he said. “It’s nice to be a part of something that’s at the forefront of what’s changing medicine.”

An advancement that was influential in Dr. Guntupalli’s ability to add Regional West to his practice was the addition of the robotic da Vinci® Surgical System at the hospital.

“The da Vinci robot has been a game-changer for the treatment of uterine cancer,” Dr. Guntupalli said.

Dr. Guntupalli sees immunotherapy as the future of treatment.

“Immunotherapy uses a patient’s own immune system to fight off cancer,” he said. “We’re learning more and more about how the immune system really does work to do that.”

Being able to catch cancer early, especially ovarian cancer, is key for treatment. Unfortunately, Dr. Guntupalli said, it’s not always the first thought when symptoms present themselves. He would like to see that change.

“Ovarian cancer presents at a very late stage,” he said. “We want patients to advocate for themselves. If they’re having abdominal pain, bloating, feeling full early after or during a meal, they need to talk to their doctor about the possibility of ovarian cancer.”

These symptoms are not exclusive to ovarian cancer, but they could indicate a tumor growing internally and causing the discomfort. Women experiencing these symptoms are encouraged to talk to their doctor.

“If we can catch ovarian cancer early, we can often cure it,” he said. “But if we catch it late, it’s much harder.”