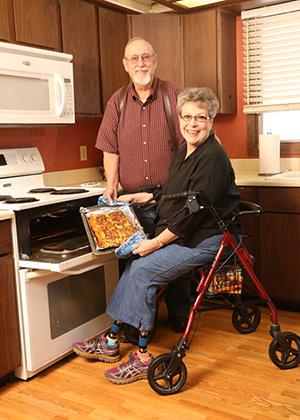 Dick and Monnette Ross of Gering share the same interests in cooking, camping, ATV riding, Scouts, and local government. They also share the rather unique experience of being hospitalized at Regional West Medical Center over two consecutive Christmases, and both spending time as patients in the Acute Rehabilitation Unit (ARU).

In August 2011, Monnette underwent emergency gallbladder surgery and later experienced circulation problems in her legs. Following medical intervention to improve the blood flow, she suffered an aortic blood clot. By early December, doctors had to amputate one of her legs below the knee. A week later, they had to amputate the other leg. Monnette lay in a coma for 30 days, but awakened after Christmas.

A year later, in December 2012, Dick spent Christmas in the ARU after undergoing back surgery. By 2013, they said, they stayed as far from the hospital as possible! However, both have returned time and time again as volunteer members of the ARU Patient Advisory Council.

“The people there were so good to me and helped me so much that I want to help in any way I can,” said Monnette. She credited physical therapy assistant Adrian Jantze and the entire physical therapy staff for their compassionate care and encouragement, which motivated her to work toward recovery, so she could be transferred to the Acute Rehab Unit. Now she’s able to get around well and drive independently using specialized hand controls in her vehicle.